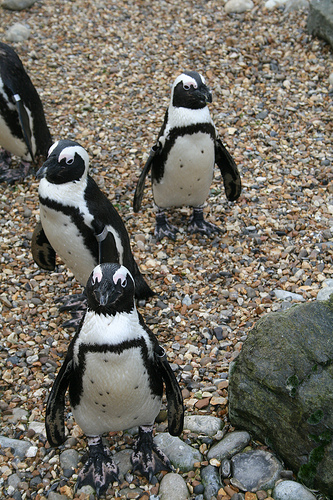 Somewhere out there is a  job where the focus is penguins.  Penguins all day, penguins all night.   Penguinologist.  Now is that the official term?  Depends who you ask but maybe this person is a marine biologist or a zookeeper or even an ornithologist (ornithology is the study of birds).

Who employs Penguinologists?  Sea World does,  the Monterey Bay Aquarium does too.  The Zoological Society of London also employs a penguinologist, Tom Hart.   Dr. Hart earned his PhD in biology at Imperial College in London.  He manages the Penguin Lifeline project at Oxford University.  He loves penguins but the macaroni penguin is apparently his favorite due to it’s attitude.

Penguin Lifeline is a project managed by Dr Hart and is a collaboration between the Zoological Society of London, Oxford University,  Woods Hole Oceanographic Institute, Oceanites and Stony Brook.  Penguin populations are declining worldwide and the mission of Penguin Lifeline is to get a complete picture of how penguin populations are changing by use of long-term monitoring in the field and genetic analysis of penguin feathers.

As a matter of fact most penguins don’t live in extreme climates like the Antarctic, most species of penguins live in (relatively) warmer climates like New Zealand, South Africa and even as far north as the Galapagos Islands.   The largest penguin is the Emperor penguin which can be 4 feet tall.  The littlest penguin is the Fairy penguin, also called the Little penguin which are only about 13 inches tall, they are native to southern Australia and New Zealand.

How does one become a penguinologist?   School!  Lots and lots of school – and a love of penguins helps too.   To become a penguinologist a person would need a bachelor’s degree in some sort of science such as biology or one of the animal sciences.  To move on to something as specialized as penguinologist, a masters or probably a doctorate degree in marine biology or maybe ornithology ( study of birds) would be necessary.   A passport, a good command of cold-weather-videography and an REI member probably wouldn’t hurt either.